An Enfield Destroyed: The Impact of British Gun Laws

Our author saw the destruction of one veteran's Lee-Enfield No. 4 (T) sniper rifle, a victim of Great Britain's inane gun laws.

Exploded View: Lee-Enfield No. 4 Mk I

The No. 4 Mk I Lee-Enfield made up the bulk of rifles used by British soldiers during World War II. Here's some background and disassembly tips.

I Have This Old Gun: British Lee-Enfield No. 4 (T) Sniper Rifle 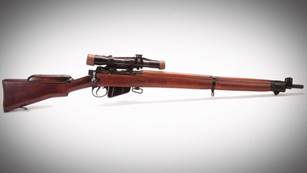 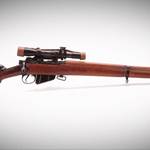 Shooters of the U.S. beware. Give way an inch to the anti-gun lobby and you'll end up like the poor folk here in Great Britain. And it's not just handguns I'm talking about. From the July 1989 American Rifleman, a British veteran says goodbye to an old friend, forced to destroy his rifle because of inane firearms laws.

In September 1944, American and British airborne troops jumped into Nazi-occupied Holland in a desperate gamble to end the Second World War by Christmas.

The Lee-Enfield No. 4 Rifle served the British Army during World War II and beyond.

I Have This Old Gun: British Snider Enfield | An Official Journal Of The NRA

I Have This Old Gun: British Snider Enfield | An Official Journal Of The NRA